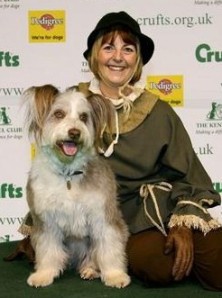 Spice is my lovely crossbreed now 10 yrs old – sold to me as a Border Collie – yes I did see the parents, both Black & White Collies – well I saw a male dog but looking at Spice – he was not her father!’ I collected her from the breeder at 7 weeks old – one of 7 in the litter – a lovely little dog but it soon became apparent – she was happy in life just looking pretty. Although when out walking she loved to run, chase and jump and play with a ball – it didn’t seem she wanted to become involved with me and anything I would like her to do.

So where to begin?
Basic training was a hard task – she would happily get out the car at the training venue, but once she realised it was to be a training session and not a “Spice do whatever you want to do” time then she would find the nearest chair or table and hide underneath it.

When she was nearly 3 yrs old – I heard about a “motivation Trainer” called Jo Hill and she was starting a monthly class near to where I lived! Perfect – let’s see if someone could help me with my little dog.

We went to the first class and when it was my turn to work, as predicted, Spice went straight underneath the nearest chair as soon as off lead. Jo was great – she told me not to worry – and to see what would happen next. Basically, Spice just stayed where she was – happy in the knowledge that she could pretend no one was around in her own little “underground” world!

The first big lesson for me was not to try and gain her attention – this would be a new game – Spice was now to look for attention from me. Well that sounded like very hard work but our first session worked very well. If I noticed that Spice was even slightly looking at me, I was to go ballistic/manic as if I just won a huge lottery – having great fun and praising her efforts!!! She actually came out from under the chair to look at what was happening to her strange owner who had never reacted this way before!! She had a short game of ball and then decided it was time to retreat once again under the chair. I stayed quite still and quiet and as soon as she looked at me – repeated the over “mad” excited owner response!!! It could take minutes before I could react – but I had to learn to be patient and wait for Spice to make the first move – albeit just an eye movement!

Jo taught us the Food Circuit* – so that even a small amount of treat could become exciting and something to chase rather than fed from hand. 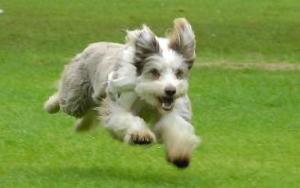 I began to learn that everything you do with an under motivated dog has to have 100% enthusiasm – sometimes just rewarding a slight sideways look – our first session went really well – but I was totally exhausted.

So this was our new “life” – yes it wasn’t to be just during training sessions but every minute of every day – if Spice wanted my attention then she was to have it and I was now to be the most exciting thing in her life 24/7. It was totally shattering for me for the next few months until Spice realised that what she could gain from interaction was far greater than hiding under furniture.

Each training session we would walk together into the hall, Spice off lead and instantly I would reward the look towards me – soon she was looking at me for the reward and after a few months – if I stood with arms crossed gazing ahead – Spice would start leaping straight upwards to get my attention! It worked. Spice soon became a very motivated dog – within a few months she started enjoying full routines – as long as I kept rewarding very strongly and with well fuelled enthusiasm. She learnt tuggy!!!! Yes she became happy to put effort into her play rewards. 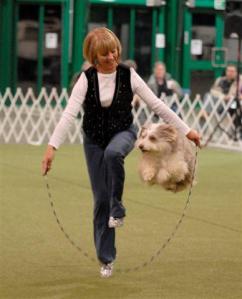 In 2008 she won Crufts Freestyle and went on to represent England in the International Freestyle Competition. She is still a very sensitive dog – she is never wrong – just sometimes “not quite right” so I still treat her in a totally different way to any of my other dogs. I often still have to revert to “silly Kath” that rewards a sideways glance, but we have a much better partnership than I could ever have dreamed of!

*)  To train a dog to enjoy food and the chase, use food that will move over the ground when thrown and not scatter – diced “solid” cheese is very good for this. Do not attempt to try teaching this on grass as the food will soon be lost from sight. Start with the dog by your side and free feed the dog a few titbits to ensure it understands the food is for him, then gently throw one piece of food about 1m in front and let the dog move towards it – as soon as the dog is committed to picking up the food, you need react instantly, in a very enthusiastic way to bring the dog back to you. If you imagine the food is an open electrical live wire and you need your “save your dog from touching it” and get it to come back to you – then that’s the amount of intensity you need to use. As the dog returns to you lure it around your body – helping by turning with the dog, and throw that piece of food used as the lure – maybe 2m from the dog this time. Ensure this is a smooth action and the lure is not lost from the sight of the dog when thrown. Gradually increase the distance until you can throw the food an entire length of the area you are using. On the last treat feed the dog when back with you so it understands the food – even when thrown – is always from you.

This entry was posted in Training. Bookmark the permalink.

2 Responses to To move…. or not to move!